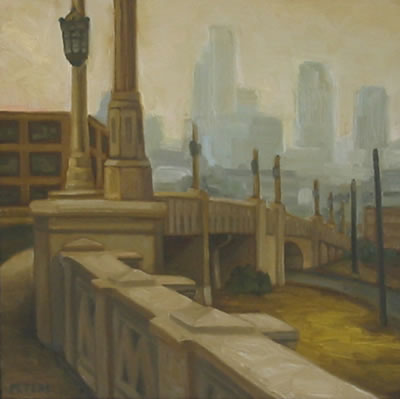 This is a small 12x12 inch preliminary study painting I did called, "Seventh Street". It takes place on the east side of downtown L.A. (again by the L.A. River). It is quite painterly, and again, I used the earthy palette but with more of a bluish background. The large final painting was 42x42 inches and is now in the collection of a producer of the TV show, "Boston Legal".

When I was living in Glendale, my landlord would often stop by to see what I was working on. This small preliminary painting belongs to him now. He often took paintings in trade, the first 6 months I lived there I didn't pay a dime for rent due to his commissions. Kind of like an "artist in residence" arrangement, but more informal. And over the three years that I lived there, he took any painting I offered him as trade for rent. It was a catch 22 because I'd have a really cool painting on the easel and he'd really want it. So would my gallery. I'd feel the need to exhibit my work so folks could see it, but then again, it was sure nice to have an immediate sale.

Posted by tonypetersart at 1:30 PM

I'm curious what the big final version looks like.

This study is really solid.

Hey Jesse,
Thanks! I considered posting both together, but thought it might seem redundant. They're very similar, however, the smaller one has a little more spontenaity in the skyline background. A big painting obviously requires more definition.

Interestingly, there are some scenes in Boston that are very reminiscent of this - at first glance I thought it was a Boston painting. I really appreciate the restricted palette and bold composition of this piece. Great job!