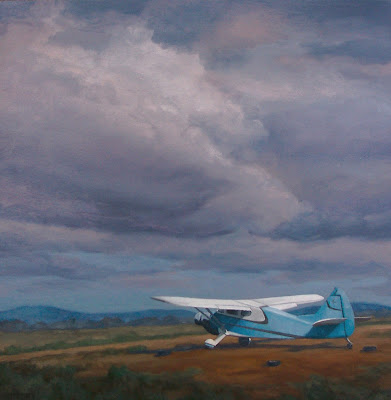 "Grounded" is the name of this new painting. It is 19 x 19 inches, oil on canvas. I've been very interested in painting big cloudy skies again, rain seems like a novelty in Southern California, so I've been running around with my camera looking for interesting light and cloud formations. This particular view is out at Montgomery Field here in San Diego. It has a flight school with a number of smaller aircraft. I was excited when they allowed me to have the run of the place, it was an inspired moment. I've often thought of painting an airplane on the ground. Thinking of it as a metaphor of my career, waiting to take to the air. 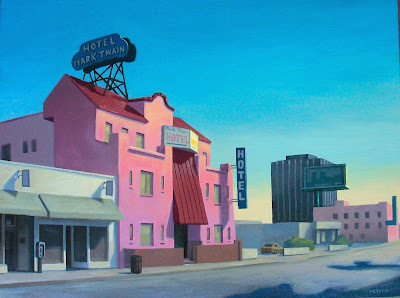 This is "The Mark Twain Hotel", 18 x 24 inches, oil on canvas. It's an old Hollywood haunt, located between Sunset and Hollywood Boulevard. I imagined that upon their arrival to LA, an army of optimistic would-be actors, writers, and other artists would have stayed at this place over the decades. All in hopes of making the big time, working in the industry. 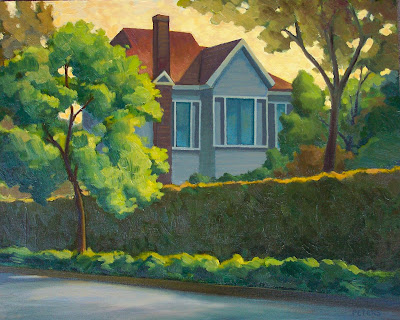 And finally, this is a piece that I recently re-worked. It's called "Morning in Pasadena", 16 x 20 inches, oil on canvas. It's in a neighborhood in Pasadena that's by the Arroyo, just off of Orange Grove Avenue. I liked those high hedges protecting the back yard of the house and the harmony of morning light in a neighborhood where Greene and Greene would have worked, or Frank Lloyd Wright... Wright once told his students that they ought to plant ivy or large hedges around their early architectural designs, so that in years to come their mistakes would be unseen as the foliege grew.
Posted by tonypetersart at 12:51 PM 20 comments: