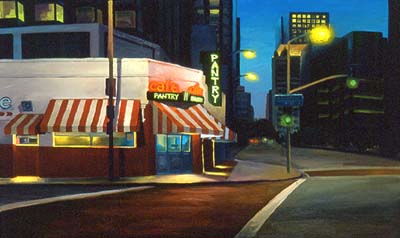 This is a painting that I did a while back called, "Night Pantry". It is 30x50 inches, a fairly large oil on canvas. It was painted in 2002, and has remained one of my more popular works. Now I've got a giclee print of "Night Pantry" in the works, it'll be a limited edition of 75 signed prints.

The older urban areas have always captivated my interest, this building has been around since the 1930's in downtown LA. I wanted to paint a nocturne because I think it's one of the most challenging things to paint. The evening I went there to photograph, I happened to get lucky with the light, just after sunset but before it's too dark.
Posted by tonypetersart at 5:10 PM

Superb sense of noir/drama/richness of atmosphere. Tony , this is really a nice homage to forgotten romantic LA.
Kudo's Maestro.

Thanks Mark, I appreciate it.

Cool painting! The lighting really is good - you caught this corner at the perfect moment. Your giclees should do well :)

It must have been nice being Mark Ryden's assistant...his work is beautiful.

Hi Tony! I love it! It's very captivating! It's amazing how you make something that would seem ordinary to someone else and bring out its beauty. Thanks for sharing yet another masterpiece. Keep them coming!

Thanks Kat. Working with Ryden was pretty darn cool, the guy is a genius. He's considerably humble for someone who's selling his paintings for up to half a million dollars.

Michelle, thanks for stopping by my blog! My favorite art is often an ordinary subject and the artist has caused you to take a good hard look at it's beauty.

Your paintings have such a glow to them. You can see a new flavor in each work that shines.

Thanks for the experiences.