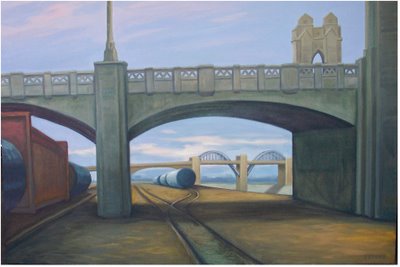 "Bridge Over Rail" is a new piece, 24x36 inches. This is a variation of the earthy pallette, but with a purple-ish gray sky. Very thinly painted for me.

A few months ago, I dragged Bill Wray out to the train yards in the rain so we could get some photos. I wouldn't dare to attempt any alla-prima painting on location here. I needed Bill to come along to watch my back, so I wouldn't get rolled by any of the trolls or crack-addicts living under these bridges.
Posted by tonypetersart at 1:53 PM 4 comments:

Hollywood You Marry Me? 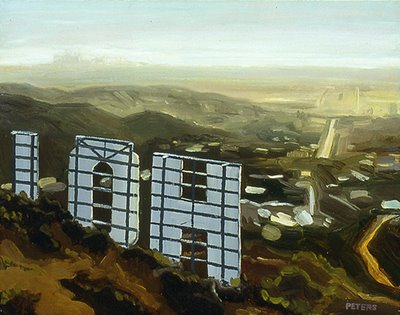 I'll be offering new giclee prints of "Hollywood You Marry Me?" in May. The size is 16x20 inches, printed on heavy rag paper. The edition will be limited to 75, all hand signed and numbered. These are archival and of museum quality, the unframed price will be $400.

I originally painted this view of the back side of the Hollywood Sign a few years ago. I took this painting to the old Mendenhall Gallery in Pasadena (when it changed to DNFA) and the director let me temporarily hang it in the show. Later that day, I took my girlfriend (Holly) up there to surprise her. She looked around the show in dislike, until she came upon this piece with excitement. She was confused when she saw my signature in the corner, since the show hanging wasn't mine. I told her, yes, it was my painting... and I said it's called, "Hollywood You Marry Me?" At first she asked if I was kidding, and I told her that would be a pretty sick joke. I showed her the ring, and she excitedly said yes, she'd marry me. We pulled the painting off the wall, and lived happily ever after. Holly and I will celebrate our 4 year anniversary on June 1st.

Posted by tonypetersart at 3:18 PM 5 comments: 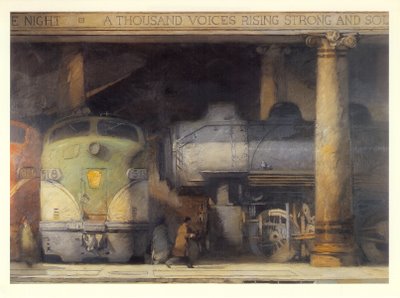 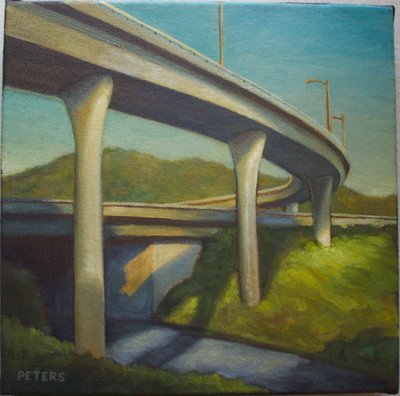 This is a small 12x12 inch painting I did, "Glendale Freeway". Going with the theme of Los Angeles icons and architecture, I felt like these freeways and looming overpasses will be our generation's legacy, like the Romans' great structures (the aqueducts and the coliseum). These great creations that will one day outlive their creators.

The bold brushwork and dark palette was inspired by my mentor Richard Bunkall who died of ALS in 1999. Here's an example of his work (top image). If you want one of his paintings, good luck. They're $250,00 to $350,000 (if you can find one that's available).

Posted by tonypetersart at 1:49 PM 5 comments: 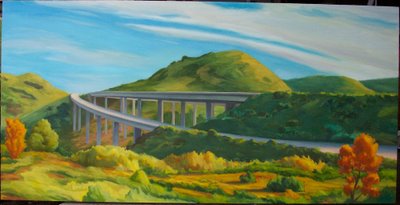 When I first moved to San Diego, I went landscape painting with my friend Aron Wiesenfeld (see his artwork in my links). We set up our easels overlooking the freeway and painted this view alla-prima. Drivers honkingly-cheered our efforts, but that didn't seem to help for some reason. My plein-air painting that day bombed. But I went back to the studio and started this quite large 30x60 inch painting, "Sorrento Valley Freeway", to somehow redeem myself. It's finally finished and I'm bringing it to the gallery tomorrow.
Posted by tonypetersart at 5:40 PM 3 comments: