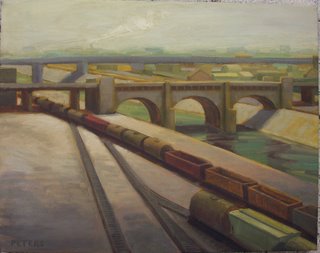 This is a relatively new painting that will be in my June show at the Tirage Gallery. I called it "LA River Trains", it is oil on canvas and 16x20 inches.

In this series of the LA River, I've experimented with a pallette of earth tones. It's a gritty and old area of town, so I felt that those colors did the best job to convey the mood of the place. When I was down there, the security guards around the trains kept warning me what a dangerous place it was. There were little shanty towns built of cardboard boxes under those bridges, some pretty sketchy folks... drunken bums, crack whores, and other people in desperate need of a shower. I kind of liked being a little scared for the sake of my art, like I was on an urban safari.
Posted by tonypetersart at 2:12 PM

Just wanna say hello, and tell U that i like the way u paint... sorry my english is pretty bad so i cant express everything what I want to say... greetings from yugoslavia(bosnia)
snezana

Thanks snezana, I appreciate it!

This one I remember and I still like it.
The more you do this type view, the more you improve on it.

Thanks dude. I had a client tell me that he prefered my "upbeat" paintings over these LA river paintings, he felt that they are kind of depressing with their earth tones. I suppose it is a little melancholy, but I want to convey a variety of emotions thru my work. Plus, I'm really drawn to the LA river and the surrounding areas for some reason.

william wray said...
This comment has been removed by a blog administrator.
11:05 PM

Feeling is feeing. If you can invoke any, you're a good artist. If melancholy and loneliness isn't good in painting, how does the client explain Hopper?

This painting is quite lovely...I've taken the train by the LA river, and it's really interesting to see all the graffitti & homeless people. The colors you used are very fitting. :)

This is pretty rad. The space feels very deep and it definitely gets that kinda dirty musty feel to it.

Thanks Jane. That train ride thru there was how I first arrived in LA... a very differing approach compared to the freeways.

I like that... "dirty and musty" sums it up quite well. Thanks Jesse.

Great work! Can we talk re mural business? Please repond to
jollyraven@comcast.net with a
contact#. Please visit my site
to see what we're doing.
Many thanks.
RM