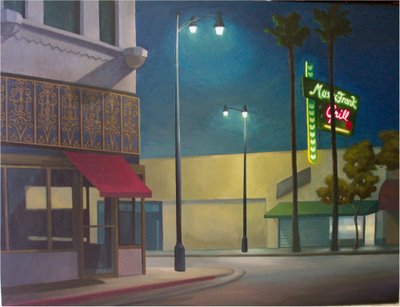 My show went well last Saturday, there was a great turn out and I saw alot of old friends. Wish I could have had this painting done on time, I was only a week off in completing it. This one is called "Musso & Frank's Nocturne", the size is a fairly large 30x40 inches, oil on canvas. I've painted Musso and Frank's before, but during the daytime. It's the oldest restaurant in Hollywood, it's been there since 1919. All the old Hollywood stars ate there back in the day, including Charlie Chaplin. In the Tim Burton movie, "Ed Wood", Ed went there (dressed as a woman) and met his hero Orson Welles. It was also a favorite watering hole of F. Scott Fitzgerald and Ernest Hemmingway.

I feel that the best way to approach doing a nocturne is to get a strong foundational drawing, so that I have a good idea of the structure even when it's hidden by the shadowy darkness. I had to make up alot of things in this one, particularly the ironwork on the facade of the forward building. And importantly, the color harmony of this piece seemed to work for me. I pushed the foreground to a warmer purple and redish color, and the area further away into cooler greens and blues. I think it has a good feel to it, like a comfortable alone-ness.

Posted by tonypetersart at 2:14 PM 4 comments:

My Gallery Exhibition in Pasadena this Saturday, June 24th 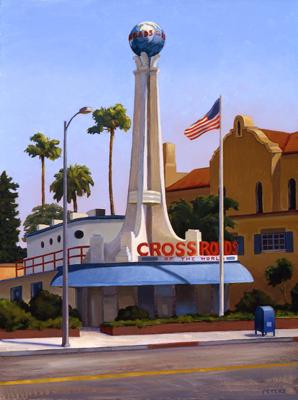 Finally, after nearly a year of work, I'm having my exhibition with 25 new drawings and paintings. It will be at the Tirage Gallery in Pasadena on Saturday, June 24th, from 5pm to 8pm. The address is One West California Boulevard, Pasadena, CA 91105. For more detalis, go to www.tirageart.com

This new painting is called "Crossroads", the location is the historic Crossroads of the World building on Sunset Blvd in Hollywood. It is 18x24 inches, oil on canvas.

Posted by tonypetersart at 2:50 PM 6 comments: 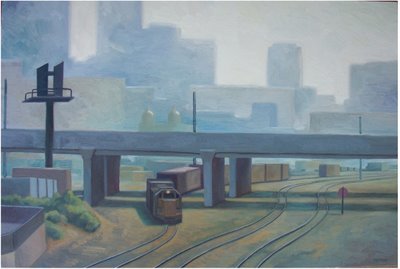 This new painting is called "City Train", it is 24x36 inches. If you scroll down, you can see the drawing I did of this same place a while back. In this painting, I wanted to play with a bluish palette, keeping the color very limited. It has a rather smokey, hazy feel. 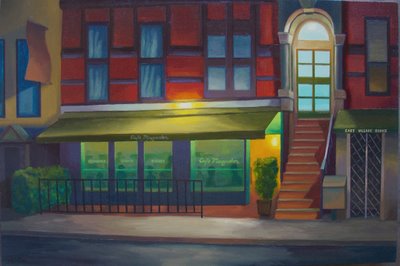 This is "East Village Nocturne", it is 16x24 inches. The scene here is on St. Marks, the East Village bookshop, a brownstone, and Cafe Magador. One of my favorite little places in Manhattan.
Posted by tonypetersart at 3:06 PM 3 comments: 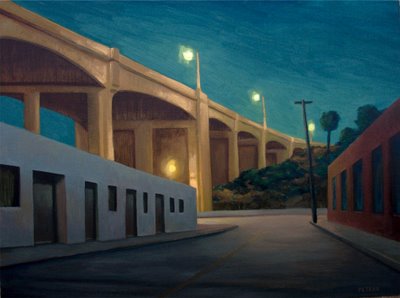 When I was a young art student, Van Gogh's "Starry Night" was one of my favorite paintings. Nocturnes remain to be among my favorite subjects and one of the more difficult things to paint. The subject seen here is east of downtown Los Angeles, one of the old WPA era bridges over the LA river. This area is full of industrial warehouses, sweat shops, and truck depots. I wanted the viewer to get a sense of the quiet solitude of this area at night, and make my own contemporary version of a Van Gogh like nocturne. It is 18x24 inches, oil on canvas.

This painting sold immediately in my exhibition, there was alot of interest in it by several collectors. But the Tirage Gallery stalled on paying me for it, it's been almost two years now. Never did get my money.
Posted by tonypetersart at 7:02 PM 5 comments: 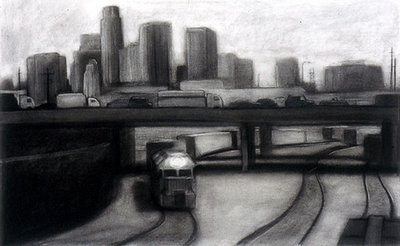 This is a drawing I did a while ago, back in 2002. I've got a new painting of it, or rather a variation of this scene, but I'll have to photograph it soon to share it here on the blog. I have long since sold this drawing, I believe it is something like 18x24 inches.

Back then I used to go on "urban photo safari" around Los Angeles with my friend Suong Yangchareon. He and I went to photograph at this location overlooking downtown LA and the 5 freeway, among other places. Now he's making the big bucks, he shows with Wayne Thiebaud and Diebenkorn up in San Francisco at the Paul Thiebaud Gallery.
Posted by tonypetersart at 5:36 PM 2 comments: