Drawing of a Girl Reading 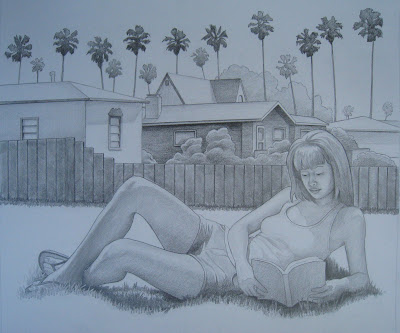 This is my new drawing, "Girl Reading" 22 x 26 inches, pencil on white Strathmore paper. The photo of my drawing turned out a little bluish. *sorry* This is a preliminary study for a seperate painting I have started. As I began collecting reference around town for my own "library painting", I decided to go with the repetative pattern of the palm trees and the fence in the background. The neighborhood houses in the background are in Pacific Beach, an area here in San Diego where I used to live before I moved to Pasadena for school. Currently I'm doing a handful of summer paintings that take place in beach neighborhoods, if you scroll down a few posts, you'll see my painting of "Blue House in Encinitas". And I'll post my other new beach neighborhood paintings as I finish them too.

I was initially inspired to do my "library painting" when I saw some old WPA murals at the New York Public Library. They were painted in the late 1930's by Edward Laning (pics below). 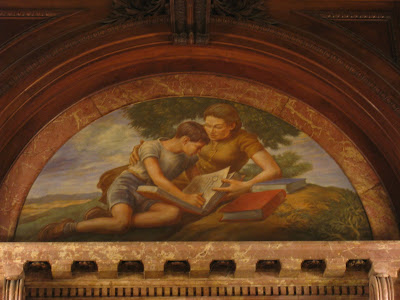 The walls in the McGraw Rotunda of the New York Public Library are decorated with large paintings depicting the evolution of the printed word. In particular, I liked these two different paintings of people sitting under a tree and reading a book. And I do love to read myself. 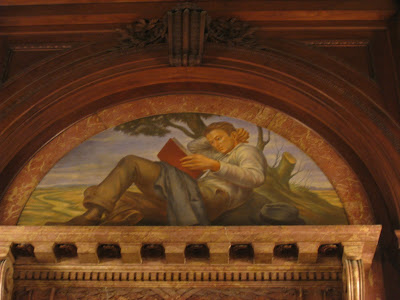 Posted by tonypetersart at 3:46 PM 2 comments: 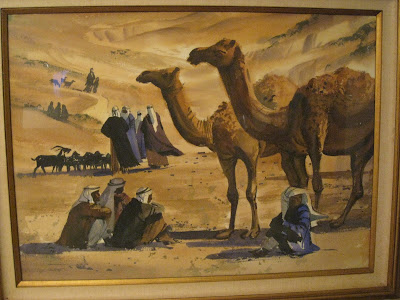 Ever since I was a teenager, my dad has had a carpet cleaning franchise in San Diego. I worked nearly every weekend with him from the time I was 14 years old, and sometimes I would get to see some interesting homes when doing the carpets. One such occasion, we were doing some work for a lady whose downstairs had flooded from a plumbing accident... she had the most wonderful collection of California watercolors. We rescued her paintings from any damage, and repaired her downstairs flood. My dad and I obtained a few paintings in exchange for some of the work we did there, Dad got a Whitaker and a nice painting of the San Diego Mission. I got to keep this particular Ralph Hulett watercolor pictured above. It's signed in the lower left corner, but no other information can be seen without removing the frame to examine the backing. I just call my Hulett watercolor "Desert Scene With Camels and Figures", 22 x 30 inches. 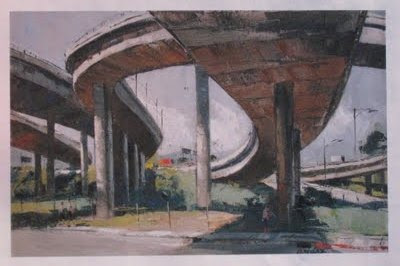 Several years passed and as you know, I went on to become an artist myself. Recently, I was flipping through the June 2009 issue of American Art Review with Eric Merrill and saw this amazing freeway painting (pictured above). I said to Eric, "Look at this painting, it's unbelievable! And I've never even heard of the guy!" Then I looked at the caption, it's called "Under the Overpass" 20 x 30 inches, oil on canvas, and was paintied by Ralph Hulett... the painting was to be on exhibit at the California Heritage Museum in Santa Monica until August 23, 2009 (yes, it closes this weekend). The exhibition is titled "California Regionalism, Oils on Canvas"... http://web.mac.com/calmuseum/iWeb/Site/Home.html
It took me a little bit to realize that the freeway (executed in thick oil) was painted by the same guy who executed my desert scene in watercolor. When I connected the dots, I made sure to check out the show. It was curated by Gordon McClelland and the show was quite impressive. 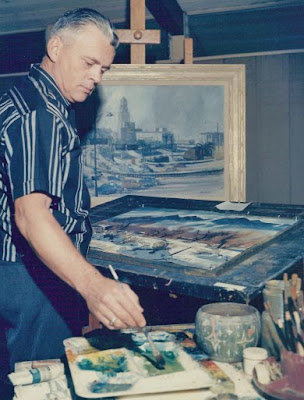 Before I even got to see the show, I started doing some research on Ralph Hulett. Turns out that he had been a student at Chouinard, the school that later ended up being dispursed to other LA area art schools like Art Center (where I went to college). He studied there under Millard Sheets and Phil Dike. Then in 1937, he became a background painter and animator at Walt Disney Studios, working on several films including Snow White and the Seven Dwarfs, Alice in Wonderland, and others.
Living in Los Angeles, he painted personal work with the same subject matter that I have found to be interesting in my own work... freeways, city streets, downtown LA, old neighborhoods, etc. Here's Hulett at his easel (pictured above). I find his technique to be quite exciting, his oil method used a lot of slashing palette knife action, lost and found edges, and thick buttery paint. His work has a genuine mid-century modern feel to it. This painting below is of an old house on Bunker Hill, an area of downtown LA that is now covered in high-rise office buildings... 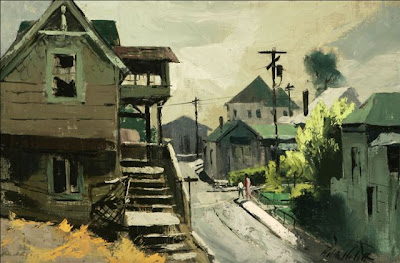 Ralph Hulett's watercolor method is also quite impressive. I find his color choices to be quite pleasing. The watercolors always have a strong design and personal touch to them, they don't look like anybody else could have painted them. Hulett certainly maintained his own voice within his work. 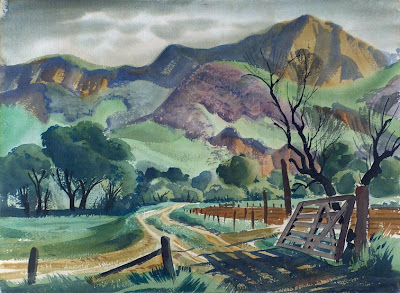 This watercolor pictured above is called "The Open Gate", 22 x 30 inches. Courtesy of the Bodega Bay Heritage Gallery... http://www.bbhgallery.com/Hulett_Ralph.htm
Posted by tonypetersart at 8:23 PM 15 comments: 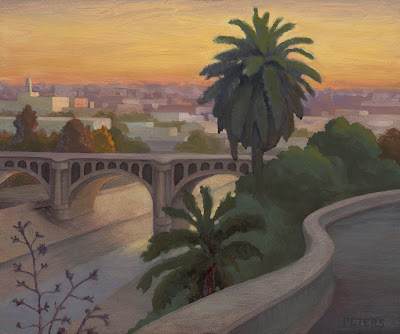 "Elysian Park View" oil on canvas, 10 x 12 inches. I don't do allot of paintings this small, except for my plein-air work, but I thought I'd change my routine in the studio a bit for the summer. I put allot of heavy paint in areas of this little piece and did some all over glazing to harmonize the color. I really like how it turned out.

Elysian Park is both a park and an adjacent neighborhood in the City of Los Angeles. It encompasses Chavez Ravine where Dodger Stadium is located, and is mostly a hillside community that is also home to the Los Angeles Police Academy. The park itself is the second largest park in Los Angeles at 600 acres. It is also the city's oldest park, founded in 1886. I actually found an Emil Kosa Jr. watercolor image with this similar view to my piece, but painted back in the 1940's.

I have been up to this spot in Elysian Park to paint on location a few times, usually with a painting-pal. There's some strange folks hanging out around there... one time Bill Wray and I were up there painting, when a middle-aged latino gentleman wearing a mini-skirt and a tube-top shouted from accross the street to us, "Hey boys, you want to have some funnn?" Bill replied, "No thanks, that's not the kind of fun we're looking for, but that's a cute outfit you've got there!"

Posted by tonypetersart at 8:46 PM No comments: