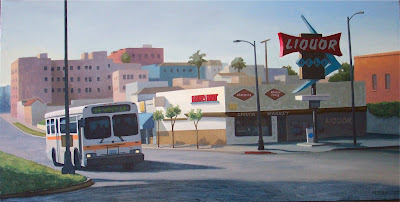 "Beverly Liquor" is a recently finished oil on canvas, 18 x 36 inches. For this new series of Los Angeles landscapes, I've spent alot of time researching locations and looking for 1950's style architecture and signage. Anything with the Googie style (like this Liquor Deli sign) was a big plus in my urban photo-safari. This liquor store is on Beverly Blvd. and I was lucky enough to see the bus pulling away from it's stop just accross the street... I feel like it really makes the painting. 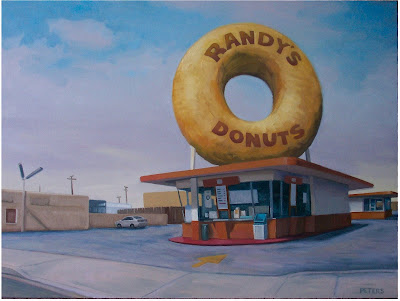 "Randy's Donuts" is fresh off the easel, it's actually still wet and waiting for a final varnish. It is 18 x 24 inches, oil on canvas. As far as donuts in LA goes, this place is an institution. Relatively close to LAX, it's located on the corner of La Cienega and Manchester Boulevards. One of my teachers from Art Center (Jim Heimann) actually once photographed the Oscar Meyer Weiner-Mobile driving past this place... he called it divine intervention mixed with positive karma and dumb-luck. Anyway, I was surprised that I had never seen a painting of it before, and I had long been inspired to paint it, so it seemed natural that I would include it in the series.
Posted by tonypetersart at 1:17 PM

Wow, another two-fer!
I love how smooth your paintings look, and for some reason the shadows on the bottom one with the donut drive me crazy. You always seem to be able to attach a vintage feel to your works.

Nice! These are both Tops-- I tried to beat you to the punch on Randy's, but my drawing was so far off on the doughnut I dumped the painting, glad I did as it was the exact same view.
I really like the liquor store, the bus is one of you best realized vehicles yet. Love the tilt. I still remember the guy in the Liquor store not knowing what the hell I was talking about when I complemented him on the old sign. Perfect job for an bitter old drunk, working in the Liquor store. He had a tortured in Mexico with battery acid face.

I love the way that big donut turned out, it may be my favorite piece from the new group of LA paintings so far.

I'd think that drawing a donut would be much simpler than drawing an excavator... isn't it?

The liquor store guy would have made for a great portrait. Like a character in an Otto Dix painting. His face probably got that "melted look" from drinking moonshine back in the day.

-These are fantastic. I just can't believe how far you have come in your work. The subtlety of the tones and details floors me. great job tone bone!

Thanks Jeremie, I really felt like I was on a roll when I painted these. Didn't want to stop working, it was fun.