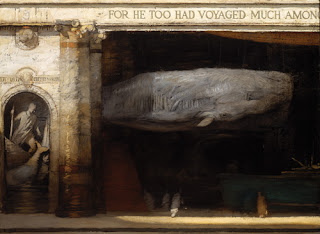 Working with Richard Bunkall  was a life transforming experience. As a student at Art Center, and an assistant at the Mendenhall Gallery, I was already immersed in the mechanics of painting. Witnessing at first-hand, this master in his dying efforts as an artist... rocked me to the core. 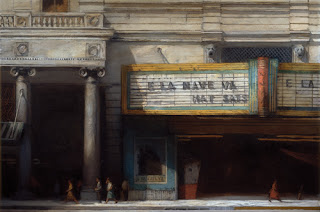 Recently, I was interviewed by Southwest Art Magazine for an article about my work. I was asked also to reflect on my time working with Richard Bunkall, they are also doing an article on his upcoming exhibition at the Pasadena Museum of California Art. 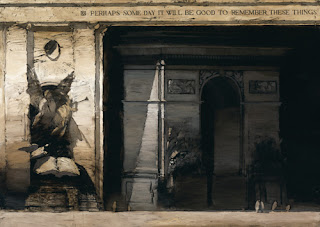 I was in my early 20's during the time (1997 to 1999). Richard was at the peak of his mastery. His facility with the brush was, in my opinion, unmatched. Those images are heavy, the subjects monumental.  To be in front of his paintings, I felt humbled, and you sympathize with his struggle to make them. ... they were sacred objects to me. As I'm sure they were to many viewers as well. 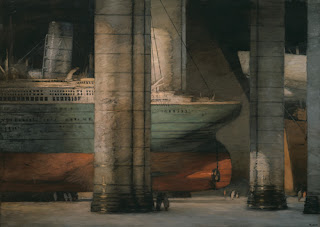 When I first met Richard in 1997, he was already very ill and needed a lot of help. He was no longer teaching, ALS had taken away his ability to drive, walk, or even breath on his own. It was amazing that he could physically even hold a paint brush... he actually couldn't, so he strapped one to his hand, because he could only still move a couple of fingers. His right arm was no longer strong enough to lift his hand, so he lifted it with the aid of his left. He could no longer stand, and worked seated in a motorized wheelchair/scooter. Since he couldn't reach the top of the huge canvases to paint, he would ask to have it turned upside down... yes, he actually painted upside down at times. 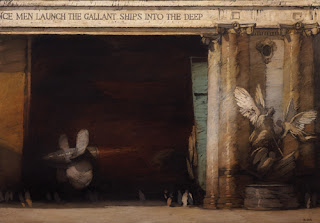 I was impressed with how much he fought with a painting. He would sometimes spend weeks on an area of a painting, it would look awesome. Then I would come to the studio one morning to see he'd painted over a large section of it! Building up a beautiful impasto, with lost and found ghost images. He said that his favorite paintings to look at showed some struggle. 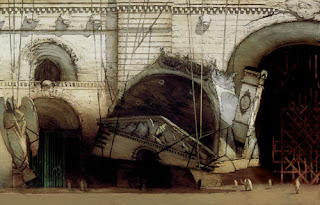 I remember visiting Richard one day to take one of his paintings to get photographed. Duke Ellington was playing on the stereo. He asked me how my own painting was coming along in school. I showed him one of my freeway paintings, he gave me a few pointers. His words were labored, he had to wait for his respirator to fill his lungs with air. There he was on his death bed, and he was asking how I was doing! I left there that day amazed, and placed his large canvas in the back of my van. For some reason, whenever I would remove a painting from his studio to get photographed, framed, or to hang at the gallery... it would ALWAYS mysteriously rain. Then a Stevie Ray Vaughn song came on the radio as I drove... "The sky is crying, can't you see the tears rolling down the street."
**The picture below is of me, circa 1999, moving one of Bunkalls paintings in the back of my van for the gallery. 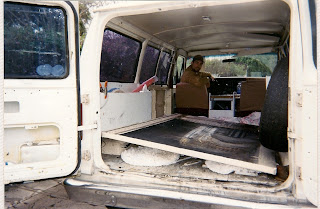 I was impressed with how Richard was determined to spend the last efforts of his life immersed in his work. He feverishly poured it all into the paintings. He spent his dying efforts still seeing his vision through, till the end. Finally, when we hung the final show at Mendenhall called "A Movable Feast", and his work was finished, he soon passed away on May 12, 1999. The show was still hanging, it wasn't even over yet. But he had reached his goal. 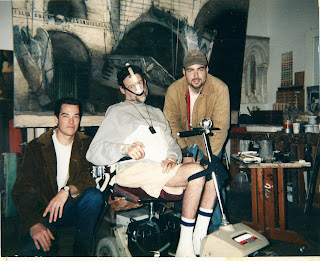 ** The photo above was taken of me in Richard Bunkall's studio, along with Michael Murphy who I worked with at the Mendenhall Gallery.


My life was changed forever. I knew I had to be a painter, nothing else would do. I was given the gift of absolute certainty that I was on the right path. For all of us, each day is a step closer to our last. My wish is that I too will be content working through my struggles till the end, putting them onto canvas with that kind of eloquence. 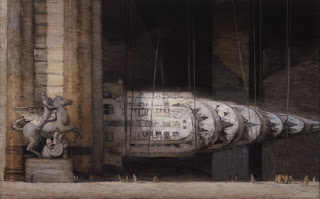 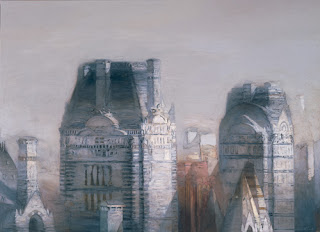 Posted by tonypetersart at 8:23 AM

It's so cool to see(read) this post.
Tourches get past, and the race continues.
Fight the good fight, run like the wind.
Do what you must.

Beautiful post. I had never heard of him until I came across this. An artist of great gifts and spirit.

Hi Tim, thanks for visiting my blog. Glad you got to "discover" Bunkall. I just went to the opening exhibition last night, it was so great to see the paintings in person again.

great write up Tony but the images are to small!

Bill... I guess we'll have to wait for that new Bunkall book to hit the shelves in March :-)

Stunning paintings and a heartfelt story, Tony!
A special man and a huge talent, thanks for sharing !

What an amazing artist, I am humbled and inspired, upset by his challenge, amazed by his ability in the face of extreme forces to cope with