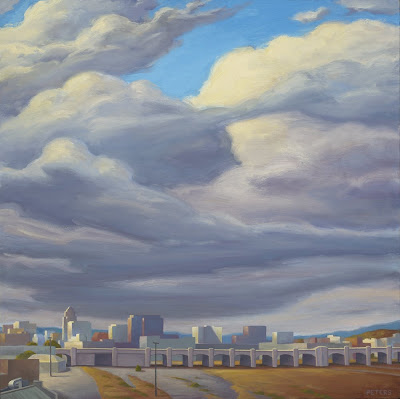 This new painting is "The Los Angeles Sky 2", oil on canvas, 20 x 20 inches. It's based on another piece that I did a couple of years ago on a larger scale. The landscape is set in an area just east of downtown by the L.A. River, just after the rain. Los Angeles City Hall is the building on the left side of the skyline. Paintings by Maynard Dixon and N.C. Wyeth inspired the stylization of the big cloudy sky. I enjoy the juxtaposition of the geometric city buildings below with the organic sky above in this piece.
I had originally started this canvas with a prominent portrait painted in the foreground, and intended to use the landscape of the bridge and downtown buildings as the "mise-en scene". Although I liked the idea very much, as the figure developed, I felt that it was too tight and photographic. I like to let a piece mature organically with a life of it's own, and although I use photos as reference for work at times, I hate for an image to appear mechanical and without a soul. So as the piece evolved, the clouds covered the portrait. I love how the finished product turned out here, although it covers up a failed attempt at another idea.
This failed attempt, however, proved to be an important step in several of my new figurative works. The current paintings I'm working on now all include figures, it's a whole new level of executing a painting. It involves allot more planning, working with models, preliminary drawings, compositional sketches, and technical challenges with paint. Entire days and weeks before even getting to canvas. Getting a harmony of flesh tones with the landscape can actually be a daunting task, I feel like it's the ultimate challenge to a painter to place a well painted figure in a space that's interesting and relates well to the setting.
Posted by tonypetersart at 12:15 PM