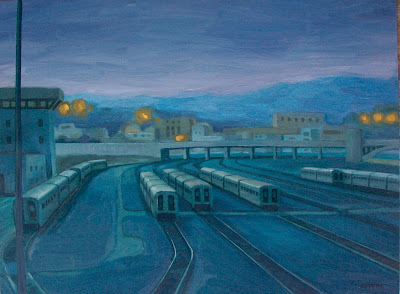 Overwhealmed with other obligations, I've still managed to get a good amount of painting done since my last post here, but I've only just photographed my four new pieces. The first one here is "Night Trains", 18 x 24 inches, oil on canvas. It's part of my ongoing series of nocturnes and also the LA river. According to my friend William Wray, we're apparently founding members of the "LA River School of Painting".
This painting depicts a train yard, just east of downtown Los Angeles by the LA River. I was on a bridge, above the river, just as the sun had set. Not a place I'd prefer to spend an evening alone, I painted the view back in my studio rather than plein-air. It's really a study in blues, a narrow variety of color, almost a tonalist piece. I chose to paint it with a loaded brush, there's alot of pigment on there, giving it a liquid feel without much for hard edges. Painting the night is difficult, as I've said before, because it doesn't photograph well and the artist needs a good color memory and sense of color harmony. It's easy to let the painting go into black, and I try to never let it get too dark, allowing the viewer to see into this shadowy world. The earliest part of the evening is like a magical hour, it really casts a melancholy mood onto the landscape.
Posted by tonypetersart at 6:03 PM

I like how the brushstrokes visible in the blues kind of soften up the land/skyscape, then contrast with the harder railroad lines. Neat!

Tony I really like this and the early part of the evening is definitely my favorite time of the day for painting. Like you say though when painting nocturnals an artist needs to rely on a very good memory; the light changes so quickly during early evening. I find it helps to go back to the same place over a few nights to memorise colours, make sketches and take notes before I start the actual painting. That and of course photography can be a great tool; but I find my camera never quite captures the colours as I see them.

Hey BG, thanks! Variety of brushwork and contrasts of shapes or value help create interest.

Hi a.r.t.p., early evening is both one of the most interesting times of day to paint, and the most difficult to pull off. The other night, I was out sketching a moonlit nocturne and making color notes. My camera couldn't make out ANYTHING, but with my eyes there was plenty there to create a beautiful painting. It's a motivating reason to paint plein-air, if at all possible. I think my sketch will help with the finished studio piece.

A Blue painting is like a braceing shot of Aqua Velva! Mmmmmmm! ICY! I'm trying to figure out the symbolism here. Are trains a symbol for snakes? Are snakes a symbol for rape?

More to the point is A young girl with a dead rabbit a symbol for surpressed ...?

tonypetersart said...
This comment has been removed by the author.
9:42 AM